From CEO to McDo: Mcdonalds and Spirituality

From CEO to McDo:

Twelve years ago, my husband and I had an offer to buy our company for millions of euros. That was our plan when we created the company a few years prior. Create value and sell. That was the only goal. We also were starting a family. We had our first child and a second was on the way. We had purchased a wild large estate in the French countryside.

Everything was going as planned.
This was in worldly terms the moment we arrived.
I should have been happy.

We made the money, we made the babies, we were running a successful company with 100 employees. Now, twelve years later, I look back on this time as the most difficult of my life.

At that time I was also having daily panic attacks leading to agoraphobia, making it difficult to even leave my house. I was afraid to be alone. My husband was busy/never home. He was managing the company, meeting with the buyers in the evenings, and also having an affair with one of our employees.

I was home with a newborn and a three-year-old. I lost total interest in the company and didn’t want to work anymore. I wanted to “keep my husband” but I was fat, scared, and depressed. I wanted to be a good mom but, not knowing when a panic attack would come, I was scared to be alone with them. I wanted to die. I was ready to give up.

At the time, I had no spiritual practice. Only a year or so before I had discovered Eckhart Tolle and had experienced a week of bliss showing me there is more to life than what we see and touch. After that week of bliss, one thought brought me back: “If you follow this you can not stay in this marriage.” I knew he would not understand, I could not talk to him about this, he did not want this. At that moment, I decided to choose the marriage. Yet within a year, the marriage fell apart.

There was a moment when sitting in our living room trying to discuss our couple with our crying 6-month-old in my lap. A voice in my mind said, “Divorce.” Another inner voice screamed, “No!” But my mouth said it: “I want a divorce.” I didn’t but there it was. I said it. It took about a year of back and forth from that moment but he moved out that night.

I was technically a millionaire at that point,
and the most miserable I have ever been.

I used the money. I bought a house, started a wellness center, and an Eckhart Tolle group. I ran this wellness center on my own and slowly, over five years, faced and ended the panic attacks. I discovered A Course in Miracles, Mooji & non-dual teachings. I met hundreds of wellness professionals; Healers, therapists, shamans, coaches, yoga instructors, etc. I went to an Eckhart Tolle retreat in Italy and also spent every last penny.

Ten years later, the wellness center was closed, the big house was sold and I had bought a smaller home in the countryside. I was broke. Truly not even enough for food. The end of each month was a struggle searching through sofa cushions for coins to buy some pasta. Add to this, it was announced at that time my mother had terminal cancer. I flew to visit her when possible. My son was also ill. He had not been to school for 3 months. My house was not finished as I had run out of funds during the renovation. I walked on bare cement floors, my bed was in the living room with no wall or door. This should be the worst time of my life. But by this time I had started actually doing the workbook lessons.

I was often panicked with the thought that I needed more money. So, I was at Mcdonald's one day, watching the workers as we waited for our order. I found myself wondering, “Do they smell like fries and grease when they get home each night? Are they fat from eating too much Mcdo? Is that beeping noise driving them crazy? I went online when I got home and applied for a job at Mcdonald's.”

Two weeks later, I started my new job as a Mcdonald's employee. My friends (the few to whom I admitted that I was working at Mcdonald's) thought I was crazy. « You have so many skills, so much experience. Get a real job! » My family worried about me. “How can you go from running companies and a wellness center to serving greasy burgers in a hairnet?” The message was, “Jeanne has really hit rock bottom, she must be so unhappy.”

What is remarkable now is though there were many very dark periods of fear during this time there was something that I hadn’t felt before even when I had loads of money. There was a new baseline of peace. 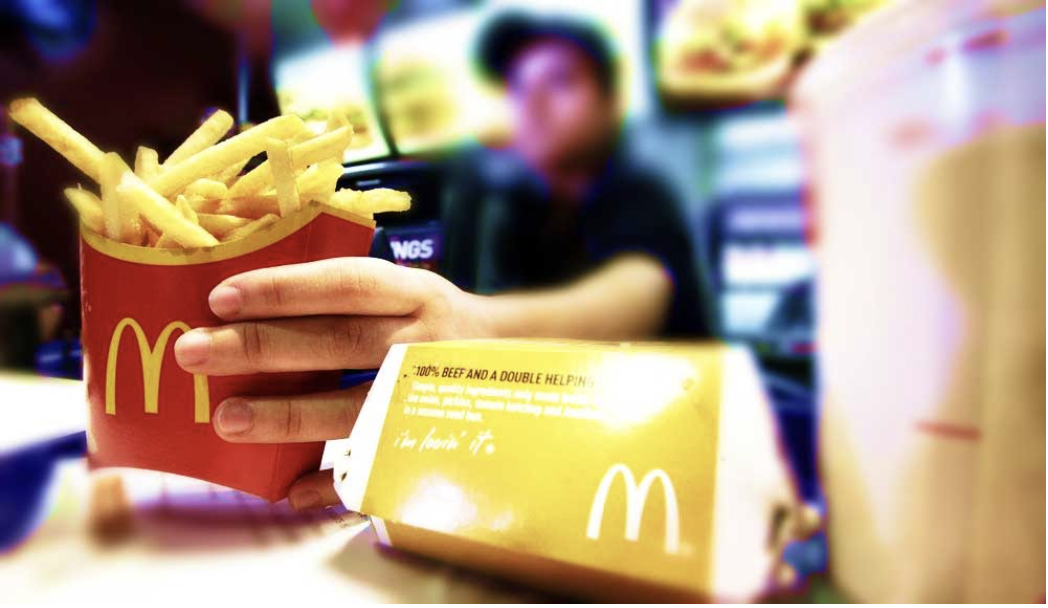 One day at McDo (as we call it here in France) what I had feared most was about to happen. A group of moms from my children’s private school, were there, sitting in McDo having coffee while the kids ran around. One of them was an old friend from “the good old money days” and I had not told her I had been working here. She was quite surprised. But instead of feeling embarrassed, she ended up offering me a ride home as my car had broken down the day before. She offered to take my son to the school Christmas party as my other son was still homesick.

What I had feared, which was really only a judgment
of my own, had turned into a miracle. I felt really
supported instead of embarrassed.

A few months into working at McDo I got a surprise client out of the blue. Web and marketing work offering as many hours as I wanted. I had done no applying or searching. It just appeared through an old colleague. The funny thing is, I didn’t want to leave Mcdonald's. So I reduced my hours to a less physically demanding amount and did both. Now 2 years later, I quit the web client and am still at Mcdonald's. Every time I have had the thought, “Maybe now is the time to quit.”, I wait for some prompt, some confirmation to go in that direction, but nothing comes and so I stay. I mostly really enjoy it.

I play with this job. I used to hate working the drive-thru because I have trouble hearing people which makes the French even harder to understand and they have trouble hearing and understanding me. I seemed to always make mistakes and it felt very stressful. So of course, I was put in this position almost exclusively. Then Kenneth Clifford stepped in reminding me to choose a new purpose, to see everyone as God. So I started playing with it. Every customer & co-worker I sent a blessing. I started to get playful with the customers. Instead of thinking, people were telling me my French is bad when they ask if my accent is American, I would now laugh and respond, yes it is a requirement for every Mcdonald's in the world to have at least one American on staff.

I even accidentally sometimes have said,
“I love you” to the clients over the drive-thru microphone!

I had little in common with the other employees who were mostly half my age and students. I would look at them and think, “God”, “Me”, and find myself opening a happy meal toy to play with together in our little drive-thru booth.

This is not to say it is always fun. I have many assignments in this scenario. When covid hit I really wanted to quit… I wasn’t going to risk my life for this job! But now a year into it, my focus is back on the healing. It amazes me that I can still sometimes get triggered and I still try so hard to be “good at my job” which by the way, I am not! I am clumsy. I make weird mistakes that require bothering a manager. I give people the wrong order. I misunderstand the French, and clients get annoyed when I ask them to repeat themselves 5 times. But other times with clients, when I say, “You are not going to believe this, but I still can’t understand what you are saying!” We laugh and they start asking where I am from and I eventually figure out that teewop is a chicken wrap and I have forgiven the french for never understanding foreigners who say mayonnaise instead of mayoooooNaise.

I eat Mcdonald's at least 4 meals every week. By the way, I lost weight when I started there—another myth blasted. I have had very strange time warps there. I once checked the time 3 times and it was always the same time. I have never understood what happened. But I was sure I was in some sort of Groundhogs day scenario. I have had huge ego outbursts there. I once spent 4 days on a grievance because a co-worker called me an idiot. I had one of my employees from the old days pull up to my drive-thru and I have spilled more coca-cola than I can count. But I have also had miracles. More than I can count here, perhaps I’ll share this one day in another article.

What I came to understand is having money, husband, big job or big house was not relevant to my happiness. Having money does not solve anything and having no money does not prevent it. Happiness is only from where your mind is. Focus on truth, reality, Christ vision and the experience is happiness.  Focus on the world, body, money, etc… the experience will be the world, the dream and all the ego has imagined.

When we focus on miracles, that is what we see.

Pure joy! Expect miracles and look for them!

For more on the topic of money, listen to David Hoffmeister in this video, "What if you didn't believe in money."

Jeanne is a Course in Miracles student and Living Miracles volunteer.

Free Weekly A Course in Miracles Live Streams Every week, David Hoffmeister does a free A Course...

Reborn in the Light of Christ - Online Retreat

What Is Christian Mysticism?