When I made a decision to come to Chapala, Mexico from California after a friend living in Ajijic told me she was really feeling me to come and help out in her new café, I had zero thought of a relationship and definitely not of marriage! My inspiration for living at La Casa de Milagros Co-Living was it would be the simplest, least expensive option as I came with somewhat limited funds. I’ve always found it inspiring to take leaps of faith into the unknown. It is always an opportunity for my Trust and Faith in the Spirit to expand with each step taken as it feels obviously given.

I arrived at La Casa de Milagros at the beginning of September, in the middle of the rainy season. There were torrential downpours that would last about 15 minutes. I had been living mostly in isolation during COVID in a very small room in a house in which everyone spoke mainly Chinese, another story in and of itself. Now, I was living in a space known as the Banana Cabana in Chapala, Mexico, sharing a room with three other women. I had virtually no time to myself. It was such a shock to me that everything took on a surreal quality. After spending so much time in silence and quiet, the conversations with people felt grating and jarring. The constant sounds, music, heat and humidity were such a contrast to my usual experience of life that I was continually struck by how unreal everything felt and a sense of wonderment that everything could change so completely, which only contributed to the feeling of unreality. 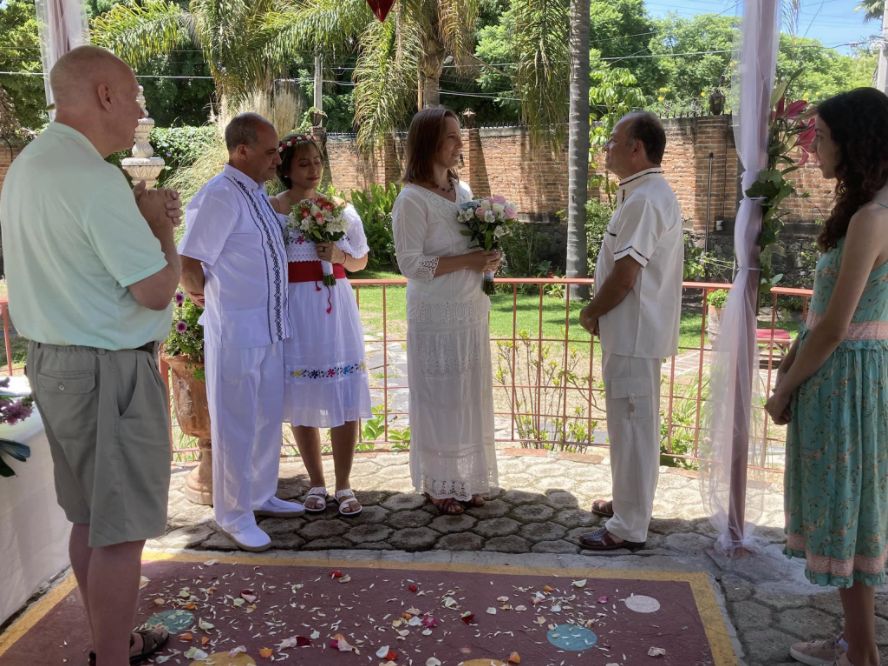 At the beginning of January, after I had recently been given the position of Steward for La Casa de Milagros Co-Living, a man arrived at Co-living who said several times that he felt inspired by the Holy Spirit that he and I were supposed to be together in a holy relationship. He would hold my hand when we went out and speak of his desire for a relationship. The sheer unexpectedness of his attention actually helped me to see that it was, in fact, inspired from the Holy Spirit. Why was all of this coming into my life and why now when I had just begun Stewarding which was already a big stretch for me as I had never been put in a position of leading anything like this in my life.

Gradually, I noticed I was also feeling drawn to him in an inexplicable way. I really enjoyed our time together. One time when we went walking at the park, we met a man fishing in Lake Chapala. He told us his name was Pedro, and he was catching a fish to prepare dinner for himself. He offered to share some with us if we stopped by again on the way back from our walk. We did return on the way back and Pedro prepared fresh ceviche right there on the Lake shore and spoke about God and his relationship with his wife and the importance of sharing everything and being very honest and patient. The ceviche on tostadas was delicious, and we all were left marveling at our Holy encounter.

It was something that I couldn’t personally fully appreciate, and yet encounters like this gave me a sense that everything was in a sort of divine order and that all was well.

I felt stunned by this simple heart opening encounter we had literally stumbled into. It was a sense of something greater unfolding. It was something that I couldn’t personally fully appreciate, and yet encounters like this gave me a sense that everything was in divine order and all was well. It felt as though the Universe was nudging me into an intimate spiritual relationship with this man that I had only recently met! Deep down I knew that it was given by the Spirit, as I don’t believe that any relationships that come into our lives are accidental.

These times spent with this man felt like a respite, a softer place I could go to feel supported, loved and cared for.

That’s not to say that I didn’t spend long hours trying to comprehend what was happening and wondering how I could possibly say a full yes to someone I had only just met. It seemed that it must all be a mistake, and yet I couldn’t deny that I felt the same draw that he was so freely expressing to me. The time we spent together felt like a respite, a softer place I could go to feel supported, loved and cared for. Before long he became part of the stewarding support team which gave us the opportunity to collaborate every day.

This arrangement lasted for about six months, at which point Co-Living was dissolved as La Casa de Milagros began the preparations for transitioning into the Tabula Rasa Mystery School. By this time, we had become boyfriend and girlfriend. The relationship brought its share of healing, turbulence and issues. On more than one occasion, we would break up and then get back together again soon after. However, as we came closer to the imminent changes, my partner began to talk more of making a deeper commitment in the form of marriage and his vision of us moving into a house in the nearby wider community! He had always said he felt this would be the direction for us. But, I couldn’t give him a full, "yes," because I still felt a commitment to Living Miracles as La Casa de Milagros continued to change and evolve. Somehow, I didn’t see how both the relationship and the involvement with the community could continue. I felt conflicted and troubled, as deep down I did feel a big, "yes," to this healing relationship.

She stood up and held me on both sides of my arms and gazed into my eyes with a look of such excitement and joy.

In addition, having never been married before made this a huge step for me. One day after we had a particularly intense conversation about committing to the relationship, I decided to go for a swim in the pool and was also feeling to pray to Jesus asking for him to make obvious the way because I couldn’t foresee events to know what would be best for everyone. Just then, the current steward came out to the pool and said, “I can feel that you are praying intensely. We need to talk. I’m on a call now but, in an hour, please come to my room.” When I arrived at her room, I immediately began to cry. The feeling of conflict between a spiritual community and saying a full, "yes," to marriage was feeling intense. I saw them as irreconcilable with each other and what was worse I saw the relationship as out of alignment with what I imagined was for the highest good for everyone. This reflected the belief that following my heart’s desire would bring trouble for me.

The current steward proceeded to tell me that she and David Hoffmeister had been praying about my next steps. They felt the guidance was to move towards the relationship and the symbol of deepening commitment to God and allowing myself to accept love. She stood up and held me on both sides of my shoulders and gazed warmly into my eyes with a look of excitement and joy. “Go and run to him!” I happily did just that, and burst into his room saying, “Yes!!! Yes, to everything.” I had been denying my heart's desire for so long, and it was creating a lot of tension for my mind. I was so relieved to simply be able to give a wholehearted, "yes," to my heart’s calling. I woke early the next day with a feeling of such happiness and commitment that I cried with joy.

Deep down, I had always wanted to be married by David Hoffmeister and have a spontaneous, light and joyful wedding with the dear mighty companions witnessing the intimate event.

We talked about the possibility of waiting six months before getting married. But, the thought of a long engagement and wedding plans made me feel anxious. Then, we found out that another Co-Living couple who had met only a few months before asked David Hoffmeister to marry them in a week, which he had agreed to. We immediately had the inspiration to ask David to marry us as well for a double marriage! We both felt the excitement and joy of taking this profound step together into the unknown.

Deep down, I had always wanted to be married by David Hoffmeister and have a spontaneous, light and joyful wedding with dear mighty companions witnessing the intimate event. The other engaged couple felt activated to take care of the details of the wedding, although they didn't have funds available for it all. However, my partner was able to pay for the flowers, cake and food for the event and because so much was coming up for healing, we didn’t feel able to actually prepare for it ourselves. Most everything was handled without our effort and ended up working out perfectly! That was a beautiful witness of the Holy Spirit making straight our path and leaving no stone to trip on.

A guided marriage is a powerful symbol of trusting in a higher purpose and commitment to God. 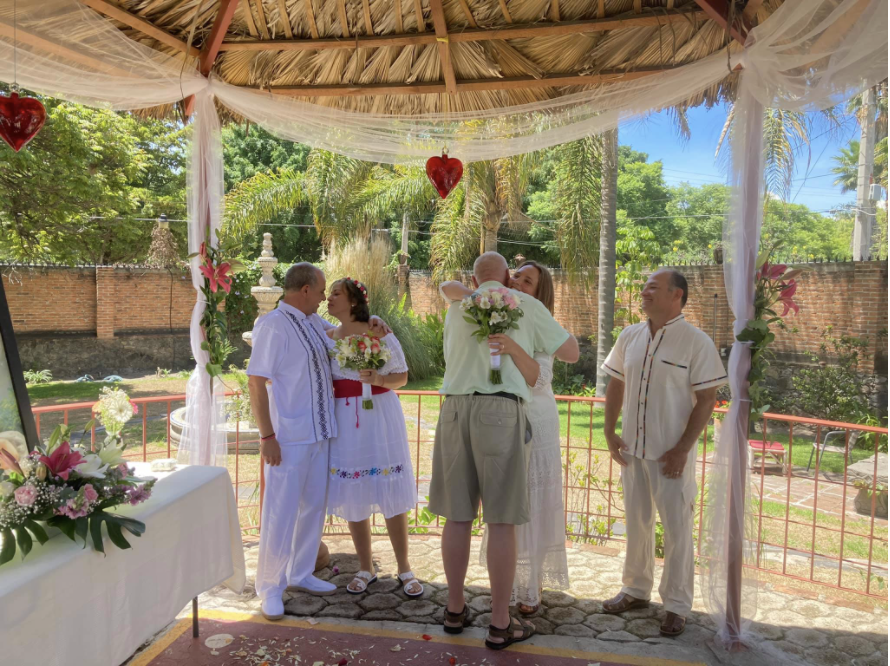 The wedding ceremony was held at La Casa de Milagros with David Hoffmeister as the Reverend on June 30th. It was a beautiful and joyful event. Instead of wedding vows prepared in advance, I felt the Spirit guide me to let the words be given in the moment:

“The Holy Spirit has been doing a work in my heart that I can’t even conceive of. There have been countless miracles to bring us to this point. I never imagined that I would get married. This marriage is a symbol of my commitment to you and to God. I love you now, and I trust you with all my heart.”

As I spoke a great emotion welled up and with a trembling hand I put the ring on my partner's finger. I’ve heard it said that the best way to develop trust is simply to take the leap of faith and trust! A guided marriage is a powerful symbol of trusting in a higher purpose and deepening in commitment to God. As we continue down this metaphorical water slide with all its twists and turns, we remember to keep our hands in and try not to grip onto the sides. Our part is to allow ourselves to be carried along in love all the way Home. 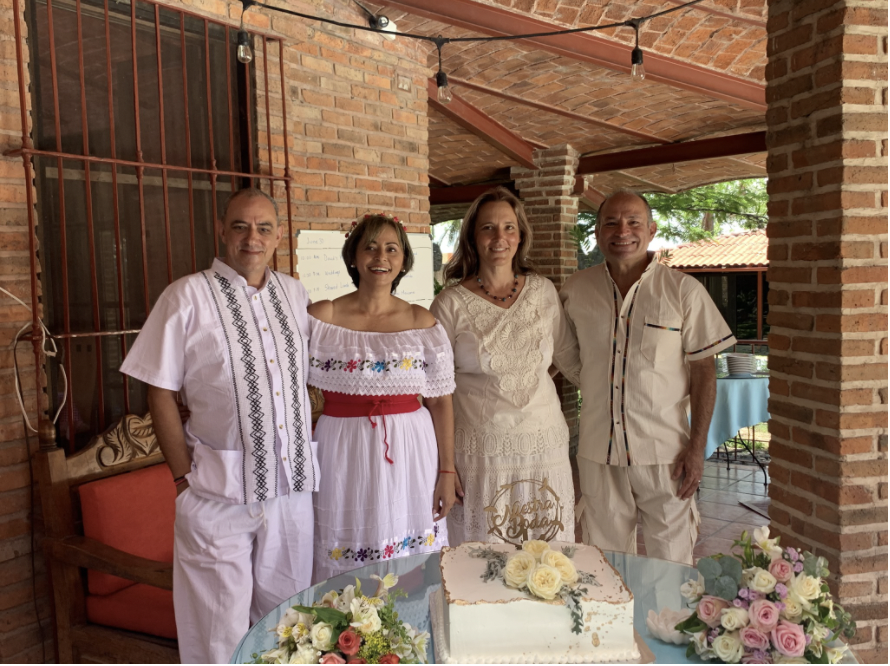 Jessica has been involved with the Living Miracles community for many years, supporting & being of service without expectation of receiving anything in return. In Truth, the gifts she has received fro...

Thank you Jessica. This is beautiful!!!!

A Course in Miracles Community

A Course in Miracles Community "Yet when he is ready to go on, he goes with mighty companions beside him....

A Course in Miracles Audio

A Course in Miracles Online Group | Meet Up with ACIM Friends